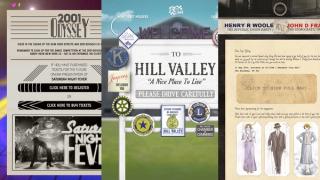 Each production had similar requirements: support the registration of thousands of guests, often in large simultaneous volumes, and give each of them a generated persona and identity documentation for use in interactions with actors around the performance venues. Each website’s visual design was themed for the production and often involved extensive use of media. In the case of Back To The Future, we even collaborated with another friend to integrate a Twilio-based telephone exchange system so that each guest’s “character” could leave voice messages for their friends and even receive messages from characters in the film, voiced by Secret Cinema actors.

The projects were wildly successful, and it was amazing to watch guests at the screenings using the materials and personas we had generated for them. We also had a lot of fun making the most of Heroku’s scaling abilities and making various performance optimisations to ensure the sites could cope with the demand unleashed by Secret Cinema’s promotional mailshots and the release of tickets.